I was one of the original "investors" in the Prodos Games Kickstarter, and I picked up my stash of miniatures from Salute a couple of years ago. Since then, the miniatures have been starting at me from across my desk - urging me to paint them... The issue is largely with finding the time to actually paint up these guys. They're resin, which takes that little extra time to prepare, and their Aliens: I doubt that I will ever find the motivation to do a proper army of these guys.

But the Alien Crusher was actually pretty fun to build and paint. Here he is: 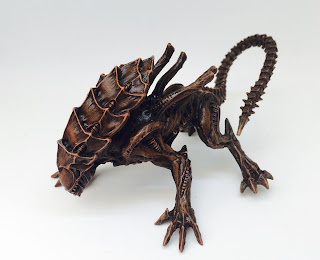 I thought this was a very bold choice from Prodos when it was first released. The Crusher appears only in Aliens: Colonial Marines - the critically-panned console game from 2014. Why chose an alien type from a game which was so poorly received? Still, the Crusher is nice an chunky, with a toy-like aspect thanks to its size. 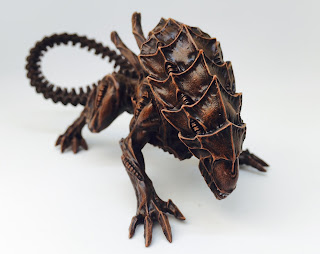 I painted this guy in the same colours as in the video game. With so much surface detail, drybrushing it is a breeze. I picked out the finer highlights with standard brushwork, and then painted the teeth in grey going up to white. 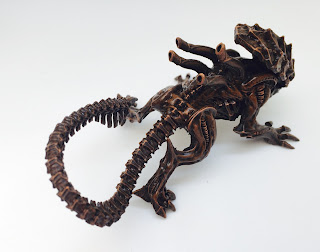 Finally, the whole model was coated with a layer of gloss varnish. I'm painting select aliens with a gloss finish, and I thought that this guy took it quite well.
Posted by Unknown at 12:45 13 comments:

Something a bit different this week. I've long been a fan of Knight Models Batman Miniatures Game. The figures are expensive, granted, but they are also very characterful, and the skirmish-scale means that you can dip in and out of their range without feeling the need to collect a whole army.

This is Black Canary, from Batman: The Animated Series: 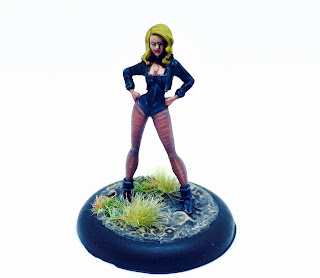 Another interesting miniature from Knight Models, which was fun to paint.

The hair looks a little off on these pictures. I tried to achieve a bright, almost unnatural yellow colour, to reflect the TV series.

My only negative comment on this figure would be that it is incredibly slender. This is something I've said before about KM miniatures. Whilst this is obviously more realistic, it can make the figure more difficult to paint and undoubtedly makes it more fragile if you're a gamer. 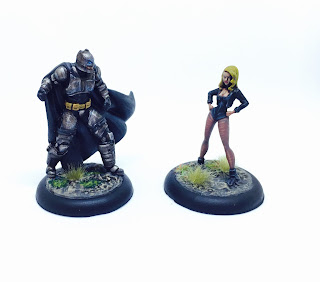 As you can see, KM male figures tend to be bigger and bulkier by quite a degree. Not an issue, but something to be aware of.

Here's Black Canary with some other KM figures: 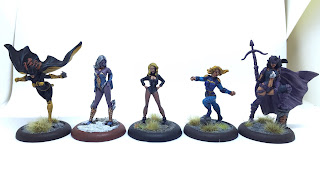 Which raises another interesting point: KM figures tend to actually vary in proportions across the range quite significantly. This is to be expected to a degree, because the range contains many different versions of the Batman setting (TV, comic book, animated series etc). 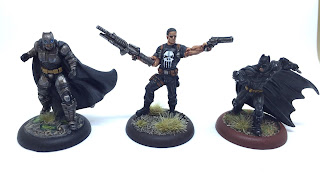 This really isn't a problem at all, but it's just something I've noticed when painting these figures. I've just seen General Zod is shortly for release, and I certainly think I'll be picking that pack up...

Apologies for the lack of updates recently, but the blog is still going strong! I've been grabbing painting time as and when, and the photography aspect has fallen behind... Anyway, here's a Slaughterpriest that I recently finished for my Khorne army: 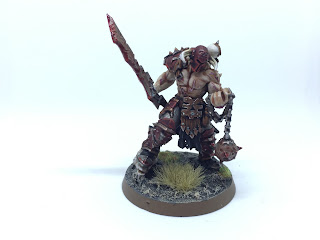 This is the model that came with the "new" White Dwarf, what, last year sometime!? I just hadn't gotten around to painting him up. When I actually started, he actually came together really quickly. It's an interesting model from my perspective, as it gave me the opportunity to try out some different painting techniques. 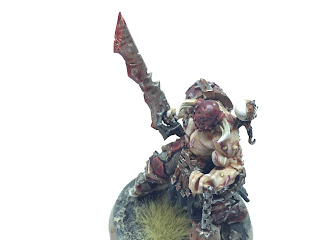 An example is the technical paint Blood for the Blood God. This is a very interesting paint, which gives a glossy finish, and has a specific texture to make it appear blood-like. If any model warrants using it, I figured it was the Slaughterpriest! I like the technique a lot.


The skin tones were also interesting to paint. I used Flayed One Flesh, which is very similar to GW's bone colours. Again, the skin came together quite quickly once I started it. 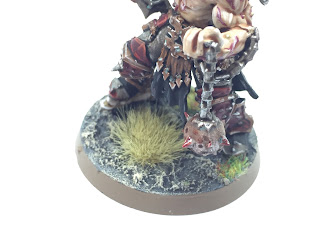 This was a bit of a one-off, as I've now really finished my Khorne army. I'm not a big fan of GW's Chaos aesthetics, but I had the models from the starter set. I think this miniature will fit in with the rest of the army quite nicely.
Posted by Unknown at 00:28 No comments:

While all the talk of new 8th edition Warhammer 40,000 has me as excited as the next gamer, I also feel a certain reluctance to invest in my armies any more until the dust has settled on the new edition... Does anyone remember the furore when Warhammer Fantasy Battle first became Age of Sigmar? Although I hope that GW has learnt some lessons from that disaster, I'm adopting caution in the run up to the new release.

The end result is that I've been dedicating more time to Age of Sigmar, and in particular I've decided to create a Beastclaw Raiders army! 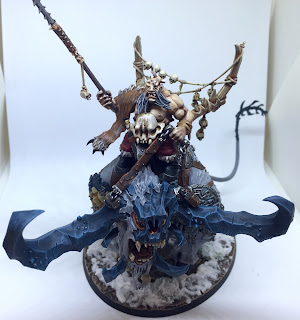 This model was a huge amount of fun. I can't remember a piece I've enjoyed painting so much! I followed Duncan Rhodes' Youtube painting tutorial (albeit for the Thundertusk), but modified a couple of colours.

As you can see, the behemoth is so big I struggled to fit it into my lightbox. 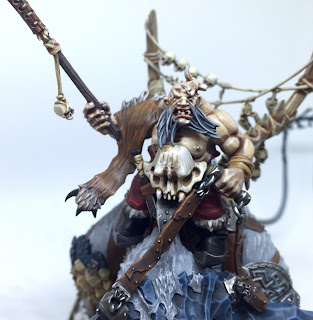 The ogre (ogor?) rider is a nice focal point for the model. I painted his skin in quite cold colours, but will probably paint the next in a slightly brighter colour to emphasise the focal point. 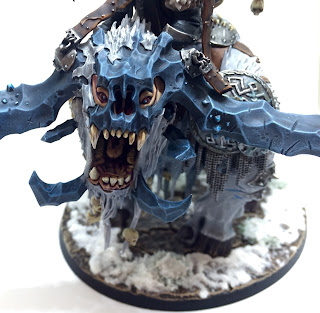 The Stonehorn's face has a lot of detail. As you can see, I also went with a snowy base. That complements the skin colour of the beast envy well. 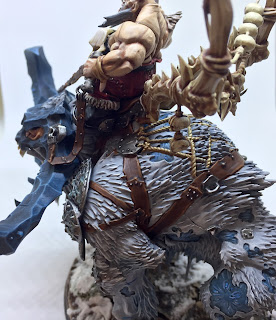 Biggest problem with a Beastclaw Raiders army? How am I going to store and transport these guys!
Posted by Unknown at 01:01 1 comment:

So today I finished the second Maulerfiend for the Chaos commission that I'm currently working on. The project is now almost finished, and the end is in sight! 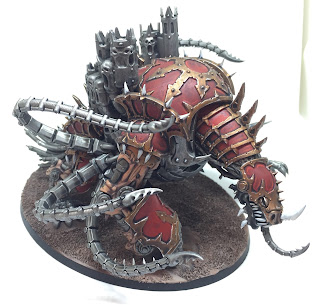 This guy was basically painted the same as the last one, but that's okay - I still really like this colour scheme! It suits the model very nicely. 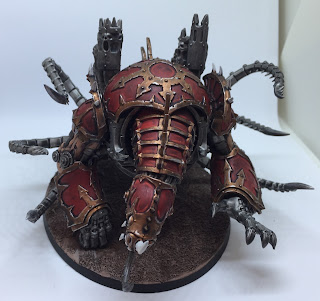 The lasher-tendrils (whips?) are removable for storage and/or transport. Fully assembled, this is a wide and very impressive model. 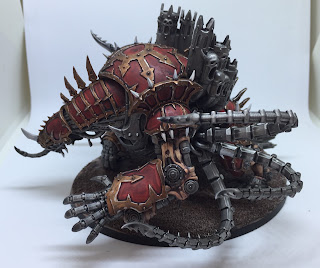 So what's next? I'm hoping to start the final Chaos squad this week - a squad of Raptors.
Posted by Unknown at 10:57 1 comment:

So I painted up some more Knight Models miniatures just after Christmas, and today got the chance to photo the finished product. I've now done several of versions of Batman, but this is by far my favourite! 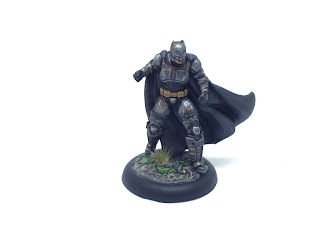 This is a typical KM sculpt in some ways - really good detail level, decently proportion and full of character. But this version of Batman is a little different: he's wearing the batsuit featured in Batman v Superman, which makes him much chunkier than some other versions of the miniature. 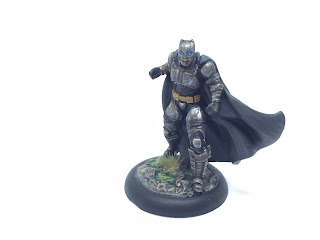 I'll probably do a size comparison picture at some point, because this Batman is quite a bit bigger than many other KM figures. I like him a lot. As ever, his cape is awesomely detailed and flows really nicely. 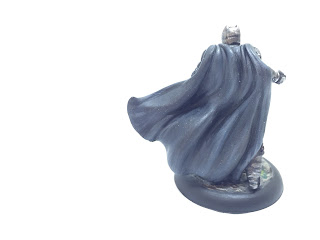 Another model from the Chaos Space Marines commission I'm painting at the moment: a Maulerfiend! 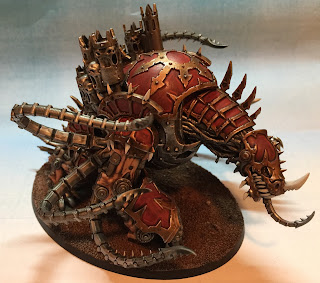 I had to take these photos in poor light, so they don't really do the model justice. It has a really nice, deep red colour on the armour plates, and the metallics really scream. The brass edging is done with a nasty silver chipping around the sharper points; as though this is an old Maulerfiend, really battered... 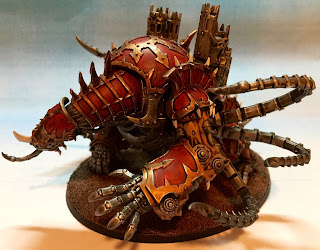 Another view of the tendril-things (I don't play Chaos!). 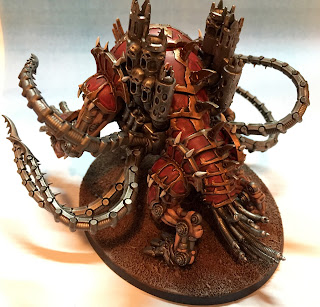 Another view of the rear of the model... 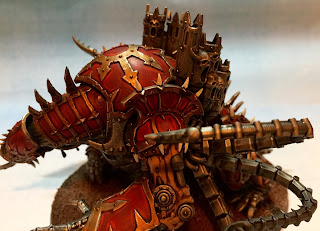 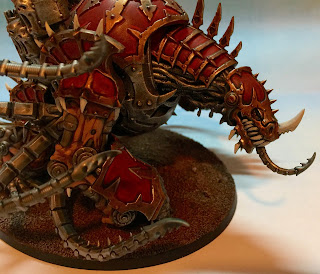 Next up: another Maulerfiend!
Posted by Unknown at 14:01 No comments: